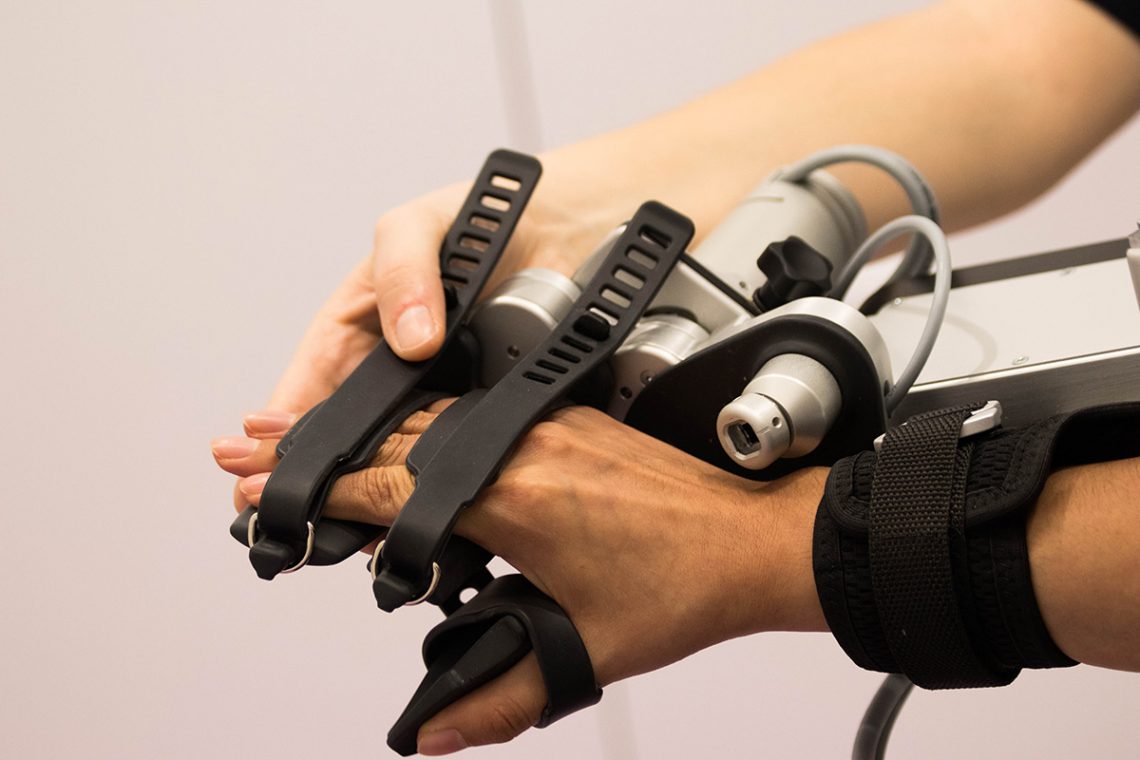 Procedure by which, objectively and systematically, we evaluate the results of the rehabilitation process in the medium, short and long term to determine the benefit of our therapeutic process on the functionality, quality of life and community participation of the people we serve in our hospital, and the effectiveness of the work methodology used. This allows us to know the evolution of our results and compare them with those of other specialized neurorehabilitation centers internationally.

Depending on the type and severity of the injury, different scales are applied to each patient, internationally approved: at the time of admission, throughout the therapeutic process, at clinical discharge and in subsequent periodic evaluations (2 and 5 years). The results of the patients who completed their neurorehabilitation process at the Institut Guttmann in 2019 and who are over 16 years of age are presented below.

During 2019, 180 adult patients with spinal cord injury completed their neurorehabilitation process, of which 66% had a paraplegia and 34% a tetraplegia.

The most frequent level of education among the population served is primary (39%), followed by secondary education (28%) and higher (25%). The mean age was 53 years and the majority were men (68%).

In 56% of cases, the origin of the injury is of a medical nature compared to 44% with a traumatic origin.

Once the rehabilitation process was completed, 89.84% of the patients had returned to their usual home, while 10% had required a temporary or permanent institutional alternative. During the last 10 years, this percentage has been stable with minimal variations (average of 89%).

Two years after discharge, only 2% of patients re-entered for any complication derived from their disability, mainly of urological, traumatic, reparative surgery type, etc.

Regarding the functionality achieved, the following tables show how our patients achieve functional levels equal to those expected due to the level of their injury and equivalent to those obtained in the main rehabilitation centers in Europe and the USA. Functionality is measured with the international Functional Independence Measure (FIM) scale, and grouping patients according to the neurological level of the ASIA scale (American Spinal Injury Association) which is the international classification of spinal cord injuries and which groups severity into categories A, B, C and D. A fact that subsequently allows us to compare our results with those of the main hospitals in the United States.

Regarding complete motor injuries (ASIA A and B):

The FIM scale measures the patient’s independence ability to carry out activities of daily living (ADLs). The FIM has a range of values from 13 to 91 points, so the higher the score, the better the patient’s level of motor functionality. The SCI Model has been extracted from the clinical practice guide “Outcomes Following Traumatic Spinal Cord Injury: Clinical Practice Guidelenes for Healthcare Profesionales” (Consortium for Spinal Cord Medicine 1999).

In order to compare our functionality at a European level, we used the Spinal Cord Injury Measure (SCIM III), the functional assessment scale used by the EMSC Group (European Multicenter Study about Spinal Cord Injury), an association that integrates the best European rehabilitation hospitals; among them, ours. As shown in the following figure, patients at the Institut Guttmann obtain results equivalent to those of the rest of the European hospitals studied.

The SCIM III scale measures functional independence specifically in spinal cord injuries. It has a range of values from 0 to 100 points, so the higher the score, the more independent the person is (0 complete dependence, 100 total independence).

After neurorehabilitation treatment, the perception of quality of life (QOL) improves in 67% of cases.

These results are obtained from the Global Quality of Life facet of the WHOQOL-BREF scale. It has a range of values from 1 to 5 on a Likert-type scale, so that the higher the score, the higher the person’s perception of quality of life.

The Institut Guttmann provides psychological support from the moment of admission to all patients with spinal cord injury in a personalized way. The results of the psychological intervention are positive, since they improve the symptoms of depression (in more than half of the cases) and consequently increases the overall positive perception of the quality of life of our patients.

Depression status is measured using the HADS scale, Hospital Anxiety and Depression Scale. The questionnaire is made up of 14 items divided into two subscales of Anxiety (HAD-A) and Depression (HAD-D), each consisting of 7 items that are valued on a Likert-type scale with scores from 0 to 3, corresponding to score 0 for the most favorable response and 3 for the least favorable response. The scores for each subscale range from 7 to 21. The higher the score, the greater the risk of the presence of symptoms and emotional distress.

During 2019, 385 adult patients completed their specialized and intensive neurorehabilitation process, of which 27% were of traumatic origin, 53% of vascular origin and 20% derived from other pathologies.

The most frequent level of education among the population served is secondary (36%), followed by primary education (35%) and higher (27%). Their mean age was 49 years and the majority of the patients were men (67%).

The origin of the injury is mostly medical (73%), while 27% of cases are traumatic.

Once the rehabilitation process was completed, 89% of the patients returned to their homes, only 11% had required a temporary or definitive institutional alternative. This percentage is around that which has been manifesting in recent years (88%).

Two years after discharge, only 3.8% of patients re-entered due to some complication derived from their disability (mainly from the digestive system and / or trauma).

Regarding functionality, we differentiate between:

Of the 104 patients with traumatic brain injury treated for treatment and rehabilitation, 76.2% had severe involvement on admission according to the Glasgow Coma Scale.

One of the assessment scales administered to be able to compare ourselves with the TBIMS (Traumatic Brain Injury Model Systems, USA) [1] is the Disability Rating Scale (DRS), with which we find that we have comparable developments. Our patients have gone from a severe disability upon admission to a moderately severe disability at discharge, with an improvement of 4.62 points on average.

We also observed an improvement in the functionality achieved, measured with the Functional Independence Measure (FIM) scale, where an increase of 24.41 points in the Total FIM has been obtained, objectifying the gain in both the cognitive and motor aspects. The following figure shows the means of the scale at admission and discharge, separated by areas and in total.

* The FIM scale measures the patient’s independence ability to carry out activities of daily living (ADLs). The FIM-Cognitive has a range of values from 5 to 35 points and the FIM-Motor from 13 to 91 points. The FIM-Total results from the sum of the two areas (cognitive and motor) and the score ranges from 18 to 126 points, so the higher the score, the better the patient’s level of functionality.

The 205 patients with this diagnosis who received clinical discharge had a mean age of 52 years. To assess its functionality, the Barthel scale is administered, where we obtain an average improvement of 26.06 points at the patient’s discharge with respect to their admission. If we observe how the means are distributed in the following figure, our patients have gone from a serious dependency at the time of admission to a moderate dependency at the time of discharge.

* The Barthel Scale, widely validated for this patient profile, measures the patient’s capacity for independence to carry out the activities of daily life ADDs. The amplitude of the scale varies from 0 to 100, with 0 being the total dependency and 100 being the full functional autonomy for performing the ADLs. The Shah et al classification, Improving Index for Stroke Rehabilitation (J Clin Epidemiol 1989) has been considered as a reference. This considers the following groups: 0-20 total dependency, 21-60 severe dependency, 61-90 moderate dependency, 91-99 low dependency, 100 independence.

76 patients with other non-traumatic brain damage, derived from tumors, anoxias, infections, etc. have completed the rehabilitation process. Their average age was 50 years.

In relation to the functionality achieved, the following figure shows how our patients achieve an improvement in the functional level, both in the cognitive and motor areas. In the total assessment, an improvement of 15.65 points is obtained from discharge with respect to income.

* The FIM scale measures the patient’s independence ability to carry out activities of daily living (AVDs). The FIM-Cognitive has a range of values from 5 to 35 points and the FIM-Motor from 13 to 91 points. The FIM-Total results from the sum of the two areas (cognitive and motor) and the score ranges from 18 to 126 points, so the higher the score, the better the patient’s level of functionality.

The Institut Guttmann Socio-Family Assessment Scale (EVSF-IG) aims to contribute to knowing and evaluating the personal and socio-family situation of the given patient and helps to detect situations of risk or social problems to make an intervention appropriate to the needs of each patient.

For data analysis, we compared the total score of patients on admission with the total score on discharge (difference between both values). According to data from the year 2019, in 49% of cases the socio-family situation has improved, in 32% it remains and in 19% it worsens.

Regarding the type of injury, the cases of strokes and other non-traumatic brain damage are those that improve their socio-family situation more frequently.

Rehabilitation reaches its true meaning and sanitary utility when, as a result of its practice, we get people who, despite their functional limitations, are able to exercise their functional autonomy as much as possible and can carry out their life project with dignity, independence and quality of life, while with active social participation.

For this to be possible, it is necessary to guarantee quality rehabilitation to all, but it is also essential to have inclusive laws and society, respectful of functional diversity and that promote an effective equalization of opportunities.

This is what we try to measure through the periodic evaluations that we carry out on all our patients (LM and DCA), 2 and 5 years after completing their rehabilitation process in our hospital. In these periodic evaluations, in addition to ruling out any pathology derived from her injury that could go unnoticed, her autonomy, her quality of life and her degree of social participation are assessed, among other aspects.

In this context, the Community Integration Questionnaire (CIQ) is administered, which provides a measure of community integration after injury. It consists of 15 points related to competition in the home, social integration and productive activities.

Below is a compilation of what results our patients obtain in some of their items: